8 pairs played out a cool pairs competition on Sunday 12th November. Cool because it was only about 5 degrees but also because we had some visitors from Rainworth (near Mansfield) where they have a Petanque club and where we will probably have a trip next summer to play an inter club fixture. Pictured are Patrick and Diana from Rainworth who walked away with the second prize on the day. Read more below. 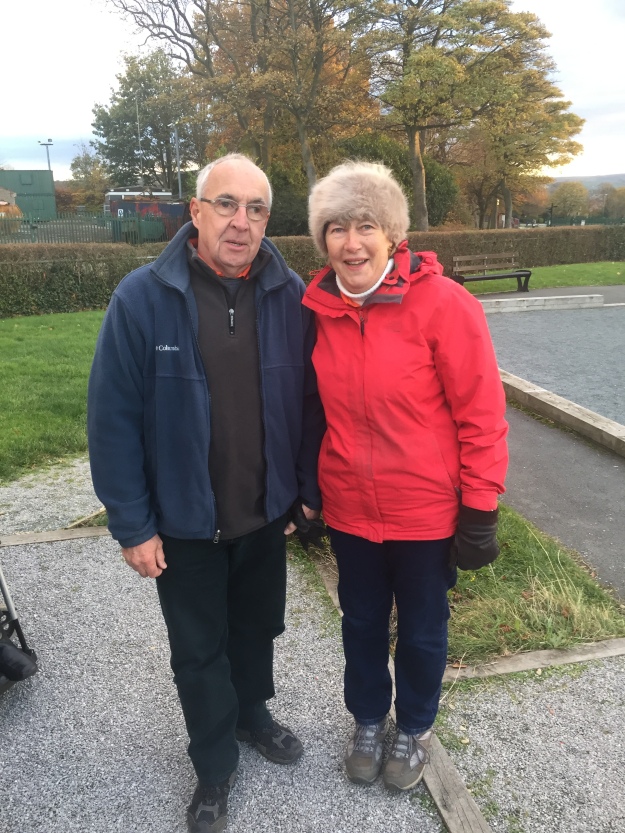 The games were drawn and everyone started to keep themselves warm. We were worried that we might not finish in the light but in the end everyone played their 3 rounds. Two teams didn’t win at all; one team won a single game; four teams won 2 games but one team won all 3 and were therefore the winners. Well done Maureen and Nigel. Pictures may follow. With an entry fee and cash prizes that meant they had £16 to divvy up.

Pat and Diana were second with 2 wins and the best points difference thanks mainly to a 3 end 13-0 win in round two and took home £12. The Rebels were 3rd (£6) and the Beeches 4th.

But as Pat and Diana were driving home they realised that the points difference read out at the end wasn’t right and they began to worry if they hadn’t in fact won second place. The evidence (the scoresheet) was in the shed but could not be accessed until Monday evening when an enquiry was launched under Chief of Detectives Roy Henstock with the result that the First and Second places were declared fine and dandy and thoroughly deserved but the points difference had been added up incorrectly. The enquiry continues into minor places.  Moral of the story: Check your points differences.