Tuesday was the all day event with Wiggington, Bridlington and Hollicarrs all travelling to Huddersfield. It was the equivalent of three league matches on the same day.

The format was based on the leagues that exist in the region. 2 triples and 3 pairs made up one league fixture. With 4 teams attending it was like playing 3 leagues fixtures in one day. Each team played the other 3. Because it could have been a long day as often league games will take well over an hour to finish every game was limited to 50 minutes so there would be no hanging around waiting for long games to finish. Games could therefore end before anyone reached 13 and there may be draws!

It was the second such event. In the first quadruple event in June 2018 Wiggington and Huddersfield tied for 1st place and were only separated by points difference. Wiggy won.

This week Huddersfield won the early games but Bridlington finished strongly and were winners on the day. 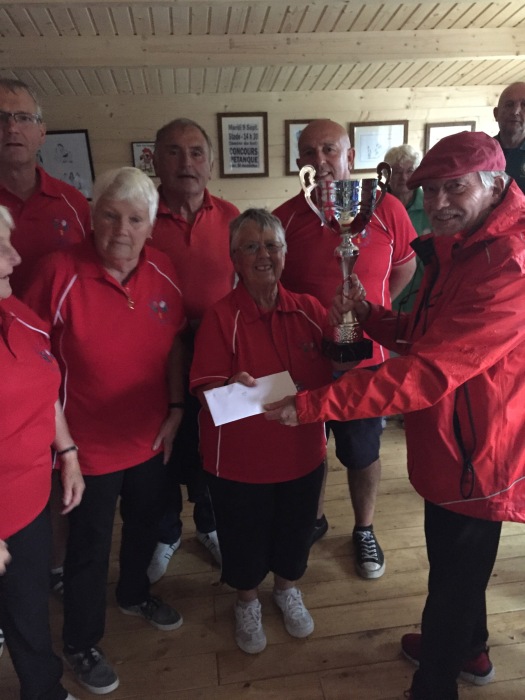 As well as playing 15 games all the teams had a fabulous lunch provided by Elizabeth and had the chance to test their all weather gear as the last hour featured some heavy rain. Bridlington won 10 of their games. Huddersfield 8, Wigginton 7 and Hollicarrs 4.

We’ll be doing it again in the Autumn at either Brid or Hollicarrs. Above are some members of the winning Bridlington team receiving an enormous trophy and their prize money from Roy.