We can resume normal club sessions if we follow a few rules. One involves undertaking a risk assessment of covid19. See this by clicking here

This will be trialled on tomorrow and if all goes well we will have a Monthly members melee on Sunday 2nd August. We may need volunteers to do the admin role. If there is no competition teams can be arranged without using numbered disks but registration sheets must be used until further notice.

This handsome trophy which will be awarded annually to the most successful player in a series of club competitions was due to be presented at the AGM in April which was postponed. Then it was going to be awarded at the July members Melee which was postponed so we thought it would be better to give it out before we reached 2021 so here it is.

You can just about read the winners’ names but it has joint winners Maureen & Brendan.

See the details by clicking on this link here

In the picture above we’re showing our 2m distancing. Those close to each other are married. Everyone remained 2m apart all afternoon. We only used 6 of our 15 lanes so games were all 3m apart. Everyone used their own coche, boules, measurer. There were no scoreboards and results were input by 1 person using 1 pen to 1 scoresheet which no-one else used. No drawing of numbers from a bag. 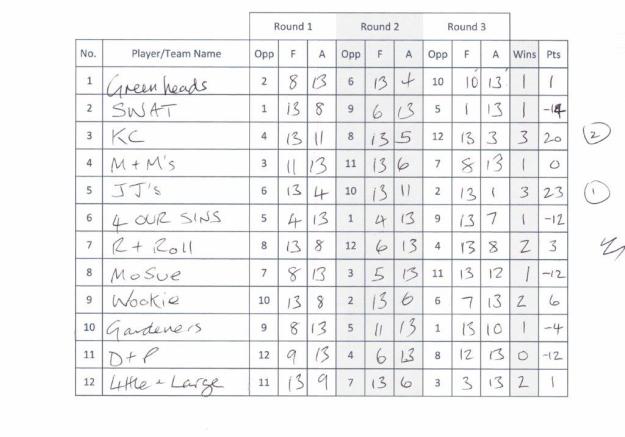 As a result of this we think we can run a members monthly melee on 5th July. Distancing rules and not touching anything that isn’t yours will still apply. Summer melee with be 4 dates July to October and winter melee will be 5 rounds November to March. Best 3 scores will count.

As of Thursday June 11th members had played 32 matches in the Singles League. In the lead at the moment are Roy and Clive both on 7 wins but Roy has played all his 10 games whilst Clive has 3 more to play. There are still 23 matches to be contested so this situation will certainly change.  See the latest league table at this link here

We’re also planning a pairs event on Tuesday  June 23rd at 1:00pm. No need to book just turn up on the day. Choose your partner or take pot luck. We will only have 7 lanes available to play on so the maximum number of players will be 28.   We thought about calling it Covid Pairs or Social teams but decided in the end on Distancing Doubles.

The secretary has emailed members with guidelines for playing and members can play at any time as “Club sessions” will not run for sometime and there will be no competitions for some time.

The clubhouse is closed. Please bring your own drinks if you want to.

Running a competition and most people think of a knockout like the FA Cup but it’s not that easy. With the uncertainty of how many will turn up some work needs to be done. Here’s our rough guide to KOs.  It’s a knockout

It’s a funny old game pétanque. Most people have picked up a garbled version of the rules on holiday or from a friend “who knew the game” but when you start a club you’ll most likely have to start from scratch but which rules do you teach?

Do you need  the Official rules of the international governing body? There is a view that these are poorly written concentrating too much on the highest level of the game and the penalties for non compliance, umpires and juries that are just too demanding for most club members. Look at the FIPJP rules

Or should you use a simple set of Picture rules which are very simplistic but may cater for social players. Try the Picture Rules

Or a short set of the official rules but with the competition level rules removed? See Short 2020

Or the latest concept the Free rules which have been prepared by an aficionado trying to get away from the complicated and archaic Official rules and provide down to earth solutions. Revolutionary but intriguing Pétanque Libre

Once the jack is thrown each player has the maximum duration of one minute to play his or her boule. How does this work in practice?

Look at the rules and penalties involved and improve your time management. Click on Just a minute 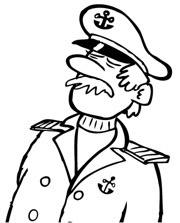 It sounds so formal to have a captain for a team of 2 or 3 players. Is it really necessary or will it help the team function? We think yes.

The game originated in France so obviously so much of its vocabulary comes from there as well. Occasionally at our club we have “talk like a Frenchman” games where everyone tries to remember their O level French from 50 years ago and fail miserably.

If you click on the link below you can see a document which has an extensive list of pétanque terms but it misses out on some of the common phrases you hear while you’re on the piste in France.

When things go well it’s common to hear Bravo! This is probably Italian but has moved into French and English and is easy to remember. A quiet bien joué  (bee-ann-ju-ay) means well played and bien tiré (bee-ann-tir-ay) is good shot. A humorous modern addition when a boules takes its own meandering path to the jack is téléguidé – remote controlled.

When things go wrong the language changes. Some of these are untranslateable. Most English people know Merde and it’s easy to say. Don’t forget the very useful double merde (doo-bler-maired) and the rarely heard triple variety.

Other unhappy expletives are a mix of putain (prostitute),  bordelle (brothel) and merde. On its own putain means bloody hell but combined with the other two words can mean fer cryin’out loud or ferchrissakes according to how forcefully they are spat out. Another phrase often heard just after someone has missed a shot is J’ai pas le droit which probably means Oh no I’ve missed it but could be more sinister. Maybe our French speaking readers can help out here. Translating idioms from one language to another is fraught with danger.

Finally the French hardly ever refer to the cochonnet. It’s an urban myth. They talk about le but (boo) or le petit. Cochonnet only exists in in O level French text books circa 1970.