Friday 27th and over 40 members and partners attended our annual dinner at Greenhead Masonic Lodge. It was a nice 3 course menu with coffee & mints and wasn’t bad at all.  Before the meal there was speech from the Chairman to say how well 2016 had gone. Membership at 86; good results in the leagues we have entered; players moving out to play in other clubs and at regional events and considerable money raised for our chosen Charity.

We also awarded 3 Petanque Oscars for the most improved players (M/F) and the most useful member (AKA Rake of the year). Both pictured below. Categories for next years Oscars to Committee before end of 2017 please.

Then we started eating. After first course we presented a bunch of flowers to Liz Henstock (still our best supporter) and also to Sue Crofts our treasurer who was also awarded an Honorary Life membership in recognition of her massive contribution to the club over 3 years. 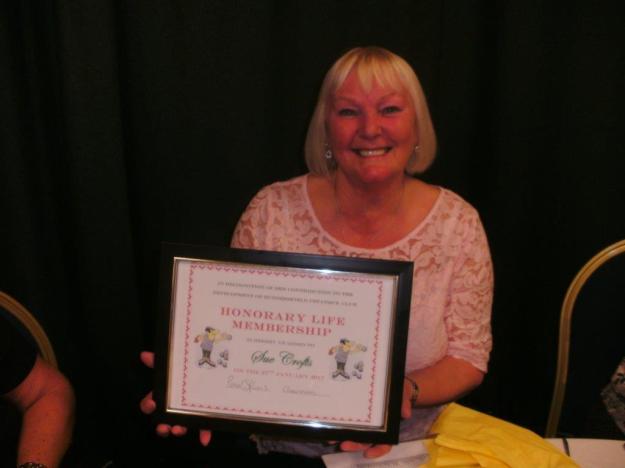 We had a game or two of Heads and Tails with Brendan as MC. Winners won prizes. Raffle tickets were sold.

Then we continued eating.

After main course we played Play your cards right with Robin as MC. Incredibly 9 players failed to get through to the end until finally one player made it.

Pudding followed and then it was Raffle. There were.. wait for it… 18 prizes to be won. It took some time but 18 people walked away with a prize. Best one was an bottle of ancient Port.

Believe it or not there were still prizes to give away so we played heads and tails again to get rid of them. 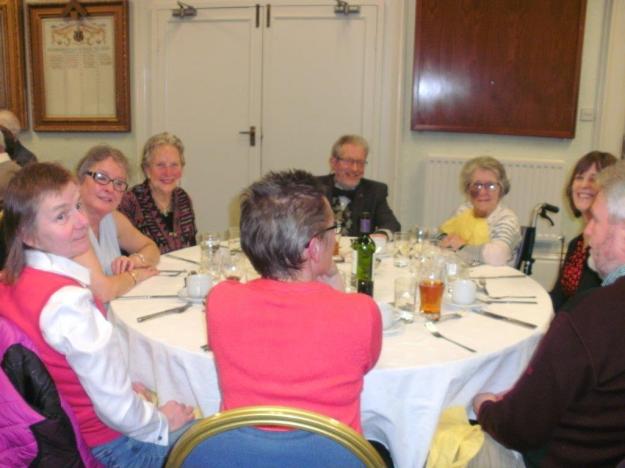 Everyone agreed it was great night and at least half the people who attended walked away with a prize (some with two or three!).

The committee decided later that we’ll have a repeat in the summer. This will be the Petanque Picnic and will be on  a sunny day in June or July. We may not be able to have alcohol in the park so we’ll have to bring our own lemonade. More later.